Address by the First Lady Andra Levite at the panel discussion ‘Health recovery: physical and mental’ of the first ladies and gentlemen summit hosted by Ukrainian First Lady Olena Zelenska Historically, war has been described as ‘…Nothing more than the continuation of politics by other means” (Claus von Clausewitz, Prussian general and military theorist, 1780–1831).

In reality, however, all wars are devastating. And Russia’s aggression against Ukraine is no different, as well as clearly being illegal, inhumane and immoral.

Russia’s so called “military operation” has destroyed Ukrainian cities, with their unique cultural institutions; destroyed the fields where grain once grew to feed the world; destroyed thousands of homes; but most contemptible of all, has killed innocent Ukrainian civilians.

Up to 600 children have been murdered in this war and many more left scarred, both physically and mentally. Little Lisa, murdered 3 weeks ago, 13-year-old boy, murdered in Charkiv, - why?

600 innocent lives with dreams and hopes for their future—parents and grandparents should never have to lay their children to rest in this way.

Therefore, Latvia is supporting Ukraine not only on military and diplomatic fronts, but also with regard to their humanitarian requirements.

Since the war began, Latvia has focused on providing medical aid to Ukraine in order to help with the immediate needs of healthcare facilities and their wounded patients.

With the support of the Latvian government, we are scaling up medical programmes for injured military personnel from Ukraine by providing rehabilitation at our National rehabilitation centre, “Vaivari”. The first patients should arrive in Latvia towards the end of July.

Doctors from “Vaivari” are cooperating closely with several hospitals in Ukraine to share their experience and best practices for rehabilitation treatments of war victims—including the capacity to produce prosthetics and orthotics.

However, it is not only immediate support for physical injuries that is required, but also emotional rehabilitation for the victims of atrocities perpetrated by the Russian army.

Latvia rapidly allocated additional funding to provide psychological rehabilitation to these victims, especially women and girls, with the help of the Latvian NGOs “MARTA” and “SKALBES”. Latvia is also developing a rehabilitation centre in western Ukraine, Ivano-Frankivsk, for women who have suffered from sexual violence, in close cooperation with local Ukrainian partners—the Information and Consultation Centre for Women.

To be clear, the question is not whether there will be psychological and mental health repercussions from this devastating war; the question is to what extent these problems will persist and the amount professional help that will be available to those in need.

Sadly, the brutality of war, desperate attempts to escape, and beginning life as a refugee in a foreign country are not rare events in human history. There have always been figures in history that cared more for their self-image and crude ideas than for human lives.

In war, civilians, refugees, and soldiers are all confronted with traumatic experiences, such as violence against themselves or their family, images of death and torture, and, especially for women and girls, exposure to sexual violence, rape, and, in some cases, unwanted pregnancy.

This war trauma can lead to nightmares, unwelcome flashbacks, and sleep and concentration disorders. Anxiety and depression are associated with all of these symptoms and thoughts of suicide are common for many refugees.

Those living through war face unique mental and psychological trauma compared to the general population.

Psychological studies have shown that suffering is significantly more severe when trauma is caused by other people (man– made disaster) rather than natural disasters.

In Latvia, there are 11 maternity hospitals and in all of them young Ukrainian women have given birth to their new-borns. Up to now 52 small and healthy Ukrainians are born in Latvia.

All these feelings will have, more or less, impact on the baby`s life.

It won`t be question of years to heal the wounds of Ukrainian people, but a matter of generations.

The material costs of war are enormous, but the price the Ukrainian people will have to pay for this unjust, unprovoked and inhumane attack is indescribable.

Therefore, Latvia welcomes global efforts to begin the reconstruction of Ukraine. They will not only rebuild Ukraine’s infrastructure and economy, but will also cultivate the best knowledge, practices and technologies to create a new and modern European state.

We firmly believe that after defeating Russia, the Ukrainian people will be unstoppable—enjoying prosperity, peace and freedom for generations to come. 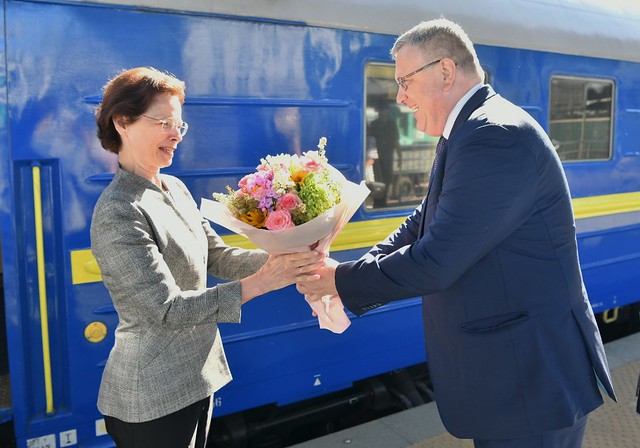