2022 will be forever remembered in the history of Europe and the world as a long and hectic year. We are in the mid-August right now but it feels like so much has already happened this year. Maybe too much.

Russian invasion of Ukraine, war crimes committed by Kremlin, suffering and victims among Ukrainians fighting for freedom have made our times different. Changing our perspective on life.

Seeing the events east of Latvian border, we can appreciate the resources invested by Latvia into strengthening our independence and security in recent years.

Our European Union and NATO membership fully guarantees our security.

I have been reassured at all NATO summits that every inch of Allied territory is equally protected and will be collectively defended. From the first minutes of potential aggression.

But we must also raise our capabilities and be strong enough to defend ourselves. That is why I have supported decision to give more funding for national defence and security, as well as introduction of universal national defence service.

Many in the Western Europe were shocked and surprised about Russian invasion of Ukraine and war crimes committed by Russians in Ukraine.

Being Russia’s neighbours, we expected this and were not surprised at all.

Living next to Russia for decades, we have learned to predict how they will act and get prepared in advance.

Naturally, Baltic countries and Poland were constantly warning Europe about the threats posed by Russia. However, naive and good-natured Western Europeans, many of whom actually collaborated with Kremlin, the so-called ‘useful idiots’, dismissed our warnings.

And now many of them have realised what they had done. Europe and the West is beginning to realise the true nature of Russia’s acts.

Latvia, Lithuania and Estonia are at the centre of European discussion about the common Foreign and Security Policy. Europe’s political centre has slightly shifted to north-east of Europe.

We supported the idea of supplying Ukraine with all kinds of weapon systems and devastating sanctions against Russia. We engaged considerable national resources to help Ukraine.

More recently, other European countries, especially Estonia and Finland, but also Czech Republic which currently holds presidency in the EU, have followed the example of Latvia and begun considering restrictions for Russian travellers coming to Europe. While we are talking about political and moral implications of such step, Russians continue to murder and pillage Ukraine. Should we really let Russian tourists enjoy Europe meanwhile?

I do not need to remind you that Latvia stopped issuing tourist visas the same day the war broke out on 24 February. But other countries continue to issue visas. Russian travellers enter Latvia with Latvian visas and also visas issued by other Schengen area countries like Finland or Italy.

I am confident that Latvia, Finland, Czech Republic and other like-minded countries should advocate for EU-wide ban on tourist visas for Russian nationals. That would make restrictive measures against Russia even stronger.

Of course, we all know that there are several European countries that benefit from large amounts of cash spent by Russian tourists and they are not happy about such proposal. German chancellor is one of those who is sceptical. But I am confident that we need to keep the discussion going. Because it is one of options that needs to be explored.

I also believe that we should revise the visas and residence permits previously issued by Latvia. We must revoke visas and permits issued to those who justify Kremlin’s actions. Or we should let them expire without extension, unless there are serious reasons to extend them.

Permanent residents of Latvia who will acquire Russian citizenship should also be denied residence permit. They will have to leave our country.

Golden visa programme offered by previous lenient governments, generosity with permits to Russian nationals was actually a way for some politicians to make business and profit. It led to additional security risks and made the problem of bilingualism worse. It is time to revise failed policies and deal with their dangerous consequences.

No matter the form of government, Russia has always been an empire and a threat to its neighbours.

Killing of innocent civilians, tortures, degrading, deportations, breach of human dignity – everything that we see today in Ukraine – it all has happened here in Latvia too.

You, dear victims of political repression, know like no other what it actually means. You have gone through occupation of Latvia and Kremlin’s repressions against Latvian people yourself.

We bow our heads in gratitude to each one of you because you made it through and kept the dream of freedom and independence alive.

Your generation and us were blessed to be those who restore Latvia.

The Third Awakening, Popular Front of Latvia, Independence Movement, Citizens Committees and January Barricades are vivid moments in our historical memory as they reflect our conviction that we are right and Latvia can be restored.

Personal experiences and testimonies of victims of political repressions is convincing and real proof of crimes, lies and broken lives left by occupation power.

An expert committee created by Ministry of Justice is planning to announce the losses resulting from Soviet occupation by the end of this year.

It is difficult to put a number on numerous broken lives and families, lost dreams and 50 years of lagging behind Europe that developed ‘healthily’.

But historical justice can only be restored once we claim reparations. We must use expert evaluation to demand occupation power, Russia, compensate our losses.

Will Russia respect that? Maybe not now, maybe never. But we need to continue making our claims. Or there will be no justice otherwise.

Let me reiterate, we have not heard their apologies about crimes they committed. Not once in the years coming to this day have they shown human dignity and willingness to apologise and make up for past wrong-doings.

Instead, Russia has been taunting us with its war crimes and continues to act in the same manner, with new crimes occurring today in Ukraine.

Despite it all, we have managed to restore and strengthen our national independence, which allows our nation to exist and guarantees everyone’s rights and freedoms.

I am certain that you keep an eye on political processes and know very well what kind of future you want for Latvia, you are civically active not only on election day but every day of your life.

I want to urge you today to go to stations on 1 October and make a responsible choice on what the 14th will look like.

I urge you to reach out to your children and grandchildren, neighbours and friends and ask them to vote.

It is a great privilege to be able to decide the future of Latvia for the next 4 years. We should not waste it.

Let us vote and decide ourselves how to make our life better. We should not let others decide what Latvia needs, especially when they do not have our country’s best interests at heart.

Once again, let us be responsible and exercise scrutiny.

Ignore empty promises and those who promise fool’s gold. Let us judge them by their deeds and work. And let us be critical. Critical voters are the main asset in democracy.

Let us focus on actions, not words.

We live in a difficult period and the next parliament and government will have to be wise and inciteful. Let us choose those who can stand up to the task.

We all believe in Latvia – that is what unites us.

Thank you for everything you have done to make Latvia and its people stronger.

I hope you will enjoy a lot of sweet memories and conversations with your friends here today.

See you next year! The same place, the same time. 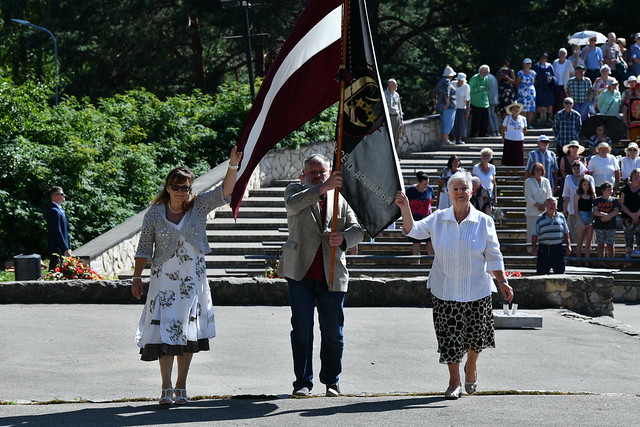