Andra Levite: demographic issues are becoming increasingly important for Latvia and many other European countries On 21 November, Andra Levite, the spouse of the President of Latvia, attended the 75th anniversary of the Riga Maternity Hospital, presenting midwife Rita Romanovska with a lifetime achievement award and gynaecologist-obstetrician Ināra Miltiņa with a lifetime contribution award. Riga Maternity Hospital, appreciating the contribution of its Fund patroness A. Levite, presented her with the Magnolia flower award.

Remarks by A. Levite on the 75th anniversary of the Riga Maternity Hospital

Honourable Mrs. Markova, Chairman of the Board of Riga Maternity Hospital!

It is a great honour and pleasure for me to celebrate the 75th anniversary of Riga Maternity Hospital with all of you today.

75 years, or more exactly 73.4 years in 2021, is the average life expectancy of a person worldwide (source: World Health Organisation). 75 years is a whole human life.

Riga Maternity Hospital has experienced a lot in these 75 years.

The entire medical staff has followed, learnt and applied new medical discoveries, as well as adapted to changes in public opinion.

Not only many twins were born at the Riga Maternity Hospital, but also the first triplets in Latvia.

From the habit of expectant fathers waiting nervously at the door of the delivery room, the transition has been made to natural family births.

From the limited contact between the newborn and the mother "for the duration of breastfeeding", there has been a shift to the all-important "bonding" immediately after birth in the delivery room and to the 24-hour "rooming-in" during the postnatal period on the ward.

There has been a shift from the unilateral decision-making by medical staff to a model that involves the family, but does not prevent professional intervention in childbirth when medically indicated.

Every year since its foundation in 1947, one third of Latvia's newborns have been - and still are - born at the Riga Maternity Hospital.

Just as a seismograph registers when an earthquake is approaching, the staff of Riga Maternity Hospital feel, see, hear and experience the changes in Latvia's demography.

Changes in the Riga Maternity Hospital - positive or negative - sooner or later are felt by all other maternity units in Latvia. But even more so - the entire Latvian society.

The girls born in those years are today 24 to 35-year-old women, an age that is medically most suitable for childbirth with the fewest expected complications.

However, due to this decline, the number of these women in the population is lower than in previous generations, and from a demographic point of view, we as Latvian society are sorely missing them.

We are also missing the women who left Latvia during the crisis years of 2008-2010.

In addition, especially in Europe, there is a change in the attitude of the younger generation towards pregnancy and children in general.

Pregnancy does not happen as it used to, it is now planned. The exception is perhaps the case of pregnant minors, who unfortunately are not educated about reproductive functions either in the family or in school. They are entitled to special medical and social assistance.

Often the child is evaluated in the same categories as material well-being, personal freedom and individual growth. The choice, unfortunately, is often not in the child's favour.

However, the responsible family planning is welcome, bearing in mind the immutable biological laws of man.

I would like to mention that the laws of biology do not apply to women alone.

Studies have shown that men's reproductive health has also deteriorated in recent decades due to various addictions, sedentary lifestyles and other adverse factors.

When Konrad Adenauer, Germany's first post-war Chancellor, was asked in the 1950s what he thought about demography, he reportedly replied that there was nothing to worry about, because people always have children. Adenauer had seven children and the first President of Latvia had nine. It is hard to imagine such a reply nowadays.

However, this answer was given before the era of safe birth control. This answer predates the 1968 student riots in the Western world, where one of the demands was a woman's right to self-determination in all areas.

Demography has become a burning issue for Latvia, as for many other European countries.

In order for people to always have children, state support is needed. We need a responsible person who coordinates activities between various ministries, including health, education, welfare and the environment. Seemingly between all ministries in order to have the most favourable outcome for the child.

Especially important is a child-friendly public opinion, people's lifestyles and genuine love from parents, relatives and loved ones.

Through their daily work, innovations, participation in solving social problems the board and staff of the Riga Maternity Hospital have clearly demonstrated that they truly care about children, mothers, fathers and the demography of Latvia.

I wish you a lot of work and many more birthdays every day for many years to come! 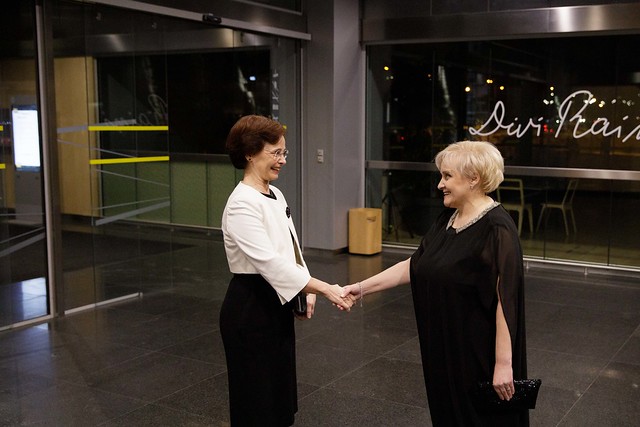