On 14 November, to celebrate the 100 years since the establishment of the Presidental Institution of Latvia, portraits of two acting presidents of Latvia – Pauls Kalniņš (1944–1945) and Jāzeps Rancāns (1947–1969), painted by Ritums Ivanovs, as well as logbooks of presidential orders and decrees from the National Digital Library of Latvia depicting everyday activities of presidents of Latvia, were revealed during a special ceremony at the Riga Castle.

‘As we celebrate the centenary of the Presidental Institution of Latvia today, we pay special tribute to Dr. Pauls Kalniņš and bishop Jāzeps Rancāns. We are adding two new portraits to the gallery of presidential paintings. Some may not know, but Soviet occupation did not disrupt the continuity of the Presidental Institution of Latvia,’ President of Latvia Egils Levits said at the opening, underlining that Kalniņš and Rancāns continued to act as presidents of Latvia in exile during the Soviet occupation or the period between Kārlis Ulmanis and Guntis Ulmanis.

National resistance movement and Latvian Central Council, acting presidents of Latvia and Latvian diplomats were all instrumental in maintaining the continuity of Latvian State and restoration of national independence, added President. ‘We had first to ensure continuity of state and Presidental Institution to be able to restore them later. Memorandum of the Latvian Central Council of 17 March 1944, Declaration on the Restoration of Independence of Latvian State of 8 December 1944, documents drafted by members of the Latvian Senate in exile between 13 March and 3 April 1948, and many other important steps taken by Pauls Kalniņš and Jāzeps Rancāns were crucial in achieving that’.

To mark the 100th anniversary of the Presidential Institution of Latvia, logbooks of presidential orders and decrees and lists of recipients of state orders and decorations have been added to the National Digital Library of Latvia. ‘You can find some genuinely unique documents here – for example, a record which confirms that Jānis Čakste has resigned from Saeima to accept the position of the president of Latvia in 1922, and many other interesting documents,’ Andris Teikmanis, Head of the Presidential Chancery, said as he confirmed the continuation of presidential archives digitising project. 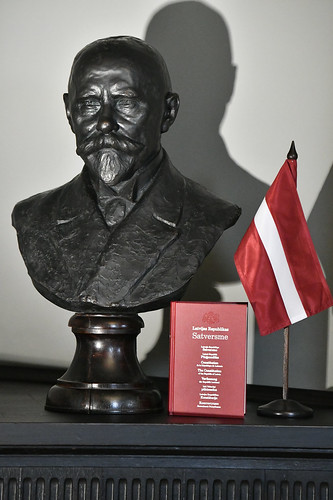