‘We met today to discuss the initial draft of the government declaration, which was sent to me by the outgoing prime minister yesterday.

I have carefully evaluated the proposed draft. It focuses on 5 areas. One of them is security and foreign policy – draft gives good impression of what government intends to do. Then there is education, a very important priority. I think the wording needs further fine-tuning, especially with regard to higher education, research and technologies.

There is also energy, climate and environment. It is a new policy area for Latvia – like the rest of Europe, we need to consolidate several policies into one and also follow the general line defined by European Union.

There is also general competitiveness and living standards. Under this goal, declaration identifies what people can expect from dedicated government policy and how coalition intends to solve various issues linked to quality of life.

The draft focuses on main priorities, but I think these priorities need further fine-tuning and identify solutions in greater detail.

The main outcome of the evaluation of draft declaration and meetings with Mr Kariņš is that I now have the necessary assurances of the stability of new coalition. It has agreed on many common objectives and is ready to focus its work over the next four years on these priorities.

The framework of the coalition, as described in draft declaration, includes economic and social goals that will bring significant benefits to our people when achieved. This gives me confidence to sign the decree nominating Mr Kariņš as the next prime minister today and ask him to form the Cabinet of Ministers, which can then be approved by our parliament, Saeima.

Once government is formed and gone through vote of confidence in the parliament, Cabinet will produce a precise work plan that will give more  details on how specific goals in the declaration will be achieved.

We have worked hard after the elections to make sure we have a new and united coalition that is ready to work together and spend the next for years making Latvia better.’ 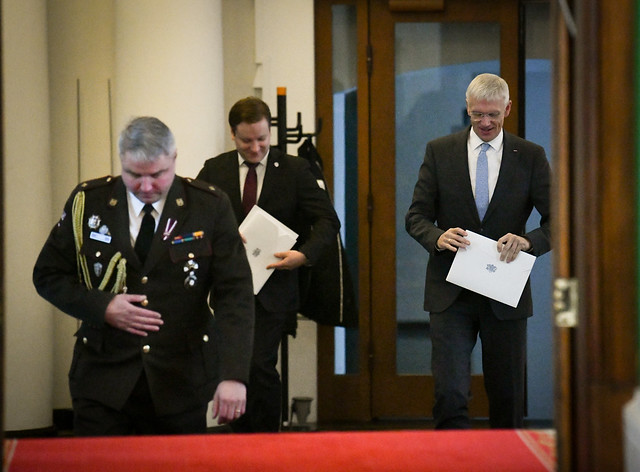