President of Latvia: Greece and Latvia have shared vision of the future – we need stronger EU and NATO, more security assurances for Europe On 1 June, President of Greece Katerina Sakellaropoulou and Mr Pavlos Kotsonis arrived in Latvia with an official visit, which began with a meeting with the President of Latvia Egils Levits at the Riga Castle.

Statement by President Levits to media:

‘I am happy to host the official visit of the President of Greece, which coincides with 100th anniversary of diplomatic relations between our countries. Moreover, Greece celebrated the 200th anniversary of its statehood last year. Agenda of the visit is focused on current priorities and challenges shared by both countries.

This visit demonstrates the friendship and cooperation between our countries and will serve as an additional impetus for further deepening of Greece-Latvia relations within the European Union, NATO, international organisations and, of course, also on the bilateral level.

Greece and Latvia have both taken in refugees from Ukraine and we are doing our best to help Ukraine in all ways possible. Latvia is one of the countries that have offered Ukraine military, political and financial support, which we will continue to provide in future as well. Peace in Europe will be achieved only when Ukraine fully restores its sovereignty and territorial integrity.

Latvia also believes that the European Union should grant Ukraine candidate country status and accept the application submitted by Ukraine.

Latvia also believes that Russian aggression is unacceptable. We need to take legal steps to stop this aggression, including a special international tribunal for investigation of Russian invasion of Ukraine.

We also discussed security in whole Europe. Madrid will host the NATO Summit in the end of June, during which the new strategic defence concept of the Alliance will be adopted. Latvia believes that this concept should be based on realistic assessment of current situation and should, inter alia, ensure forward defence of the Baltics.

We welcome the application of Finland and Sweden for NATO membership. Their accession will definitely strengthen the whole Alliance.

We also welcome the adoption of the 6th package of sanctions by the European Union. Europe must strive for energy independence from Russian fossil fuels in the long run. Greece and Latvia are firmly committed to this goal.

As we can see, Russia’s war against Ukraine is causing or is likely to cause a global food crisis. We need to work together to also mitigate the impact of this crisis.

Altogether we had a very fruitful meeting with the Greek president. We came to a common conclusion that we have shared vision of the future – we need stronger EU and NATO, more security assurances for Europe. We condemn breaches of international laws. We believe that international laws must be universally respected and rules-based international order is the only way forward.

I want to thank my Greek counterpart for this meeting. Let us work together for the good of our countries and the whole of Europe!’ 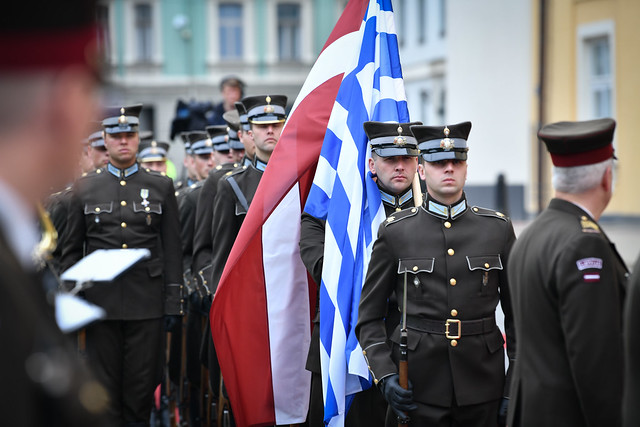