President of Latvia: NATO must have more permanent presence in the Baltics On 24 March, President of Latvia Egils Levits took part in the extraordinary meeting of the heads of state and government of NATO member states in Brussels. NATO leaders unanimously confirmed their firm stance on Russian aggression against Ukraine once again. NATO continues to strongly condemn Russian aggression, while also expressing solidarity with Ukraine, its brave nation and President Zelenskyy. Allies are fully committed to continue political and practical support of  Ukraine.

Volodymyr Zelenskyy, President of Ukraine, joined the leaders attending NATO Summit remotely to underscore the importance of continued and enhanced military support to Ukraine in its fight against Russia.

All member states reiterated their commitment to NATO Treaty and Article 5, which defends the whole territory of NATO. NATO activated its defence plans and reinforced presence on Alliance’s eastern flank, also Latvia, before the Russian invasion of Ukraine. Now it is committed to deploy another four battle groups to Bulgaria, Hungary, Romania and Slovakia.

NATO must have more permanent presence in the Baltics, said President Levits. He also thanked Poland for its significant support to Ukraine and urged NATO to ensure closer coordination between member states providing help. President mentioned that it is vital for NATO to be ready to react instantly to any potential aggravation of Russia’s aggressive behaviour.

Allies need to continue strengthening their individual defence capabilities, which also means they will need to step up their defence spending. President of Latvia confirmed that Latvia is on track to increasing its defence budget to 2.5% of GDP.

NATO will also continue to work on its 2030 Strategic Concept, which it will adopt during the Madrid Summit this June. 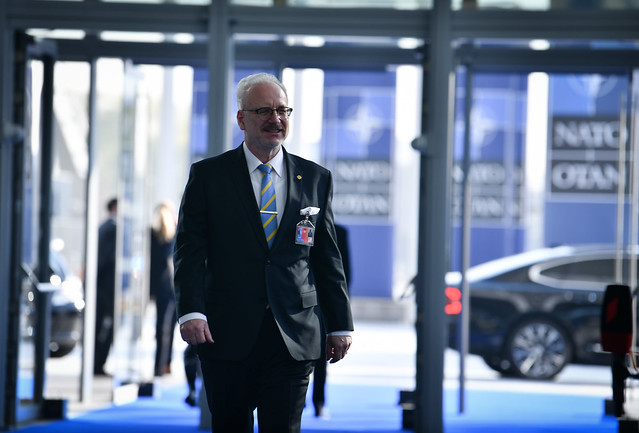