Speech by the President of Latvia, Egils Levits, in the German Bundestag on the National Day of Mourning Madam President of the Bundestag,

Today, as we commemorate the victims of war and violence of all nations, I am grateful for this opportunity to share with you my thoughts on the importance of evaluating history as we look to the present and the future.

The history of the 20th century was dominated by violence perpetrated by great powers.

The Riga-born liberal political philosopher Isaiah Berlin once wrote that the 20th century was dominated by huge ideological storms unleashed by totalitarian powers, bringing untold suffering to the whole of humanity.

In Germany, these storms have been particularly strong. Millions killed in two world wars, ethnic cleansing, attacks on sovereign states and the greatest crime against humanity - the Holocaust - characterise the history of this country, that we must never forget.

However, Germany has not shirked its responsibility for this violence-ridden past.

A prerequisite for this was a comprehensive political and moral reflection on recent history - overcoming the past.

German society was and is ready to reflect on the past while making a connection with the present.

In doing so, the deepest political questions were asked: why do people allow themselves to be drawn into the net of extreme ideology; why can pure rationalism and justice lose their ground even in the conditions of democracy; why can democratic institutions be defeated. These questions have become more important today than ever before.

Without addressing the past, the Federal Republic of Germany would never have been able to build a democratic state after the World War II.

Without addressing the past, we would not have the European Union as we know it today.

The German example shows that a nation, by openly, politically and morally assessing its criminal past and implementing a reparation policy based on such assessment, can once again become an integral member of the cross-border community of laws and values.

Therefore, Germany's overcoming of its past has become a global model today.

It can be used as a yardstick to measure democratic historical policies in countries whose history is also characterised by crime and aggression.

Russia, on the other hand, provides a stark contrast to Germany's approach to overcoming the past.

In this country alone, the number of victims of the Stalinist regime reaches several million. In 1939, after the signing of Molotov-Ribbentrop Pact by Russia, then Soviet Union, and Nazi Germany attacked other countries, and triggered the World War II.

Both occupying powers murdered, persecuted, deported and forced people to flee Latvia. Latvia lost a third of its population in both world wars.

Why, despite this historical experience, the Germans are our friends today? Why can we, together with them and many other nations, build a common European future today, while Russia spreads fear and terror?

Because German society did not feel sorry for itself, took stock of its past, and built a solid foundation of democratic values.

The Russian society has never even seriously taken it up, has never sought it and has never done so.

In an autocratic state, it is impossible to evaluate the past, otherwise the truth would begin to undermine the foundations of autocratic power.

It is precisely this lack of evaluation of the past that has paved the way for the revival of the brutal ideology of Russian imperialism.

In 2014, it led to the illegal annexation of Crimea, and on 24 February this year – to the open attack on the entire territory of Ukraine.

The American historian Timothy Snyder has aptly pointed out that Russia is using national socialist theses to justify its destructive invasion of Ukraine – Ukraine has no its own history, nationality, language, elite, in short, it has no right to exist.

However, the real, far greater enemy of this ideology, which Russia itself openly admits, is democracy as a political system, as a way of life, and the West as the embodiment of such democracy.

Modern international law, which emerged after the World War II, condemns wars of aggression and crimes against humanity.

The Nuremberg International War Tribunal put an end to the ideology of National Socialism. It definitively and irrevocably defined the criminal nature of wars of aggression. The Nuremberg trials are the cornerstone of international law and human rights.

Therefore, today we must not retreat from the standards of international law that were achieved and have been continuously strengthened since then. Without a peace order based on international law, the world would once again descend into the anarchy of war.

However, the cause of these crimes - the attack on a sovereign state - has so far not come within the jurisdiction of any international court. This is a loophole in international law.

Therefore, I support the idea that a group of countries should create a special tribunal to investigate and legally examine Russia's war of aggression in Ukraine.

It is legally possible. All you need is the political will.

It would also prevent the increasingly shameful distortion of the roles of criminal and victim.

Alongside this, legal pathways must be developed so that Russian funds frozen in the West after the end of the war can be used to rebuild Ukraine.

This would be only a natural expression of justice.

History also shows us that a politically and institutionally weak democracy can lead to catastrophic consequences, to war and violence.

Today, the European Union formed by Germany, Latvia and 25 other countries is not only an economic union. It is also a political union and a union of shared values.

The most important of these three dimensions, ladies and gentlemen, is precisely the union of values. Such values as democracy, the rule of law and human rights are the cornerstones of a democratic, constitutional state that is different from all other historical and contemporary models of state governance.

They form the deepest foundations for the cohesion of the European Union, of Europe as a whole and, more broadly, of the West.

This union of values is not just a statement, it is our responsibility for the future.

First, Europe must assert itself in a world increasingly characterised by opposition between the democratic West on the one hand and aggressive, authoritarian powers on the other.

First of all, this means that we must invest properly in our defence. We must stand in solidarity with all those who are fighting for democracy, for our values.

Therefore, we must eliminate existing dependence on authoritarian powers and ensure that new forms of dependence do not emerge.

Secondly, by standing up for our values, we are obliged to strengthen the resilience of a democratic constitutional state, its strength within its own borders.

Whatever the threat to any of these three fundamental principles - democracy, the rule of law, human rights - a democratic, constitutional state must be able to respond appropriately.

In the face of new challenges, we also need to think in the future about how we can work together in this Union to protect these values even better.

Today, on Remembrance Day, we honour the victims of war and violence.

We also remember all those who are victims of war and violence right now, in these hours, in Ukraine and elsewhere in the world.

This day of remembrance shows our strong will: "Never again!" No more wars of aggression, non-freedom, unjust regimes, mass extermination of the population.

Freedom and democracy are worth defending. 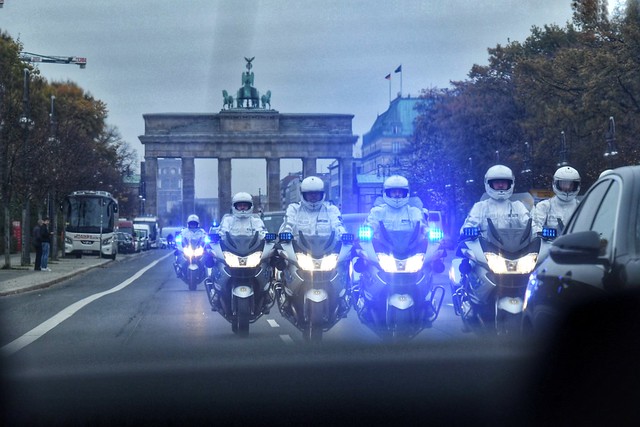