Not so long ago, in 2017, Germany and Europe celebrated the 500th anniversary of Reformation and 95 theses nailed by Martin Luther onto the door of the Castle Church in Wittenberg on 31 October 1517.

This year marks 500 years since Reformation came to Latvian lands.

It was right here, in the Riga St Peter’s church, 500 years ago in 1522, right around the Pentecost, that pastor Andrejs Knopkens first mentioned and defended the ideas of Reformation in an open discussion. He had actually been mentioning these ideas in his prayers for the last 12 months or more since his return from Germany.

Reformation quickly caught on and immediately became popular among residents of Riga. In October of 1522 Riga township appointed two pastors in Riga churches who openly declared support for religious dogmas of Reformation.

This gives us the precise amount of time it took for these ideas to travel from Wittenberg to Riga. The speed was five years.

We can feel proud about Riga St Peter’s Church standing next to Castle Church in Wittenberg as the second most significant religious centre in Europe where Reformation ideas were nurtured.

Preamble of our constitution, Satversme, explicitly stipulates that Latvian identity was and continues to be based on Latvian, European and Christian traditions.

Quickly growing popularity of Reformation ideas is another example in the long line of events that put Latvia at the centre of Europe’s intellectual development and ensured that Latvia is part of progressive dialogue in Europe.

According to Saeima, St Peter’s Church can rightly be considered a symbol of Riga and Latvia’s place in the Western Christianity and the European culture area with its set of values  shaped by it.

Martin Luther encouraged to bring the word of God closer to people by using a language that people understood and could use to read scriptures. He strongly supported the development of Latvian, local schools, book publishing and culture.

I would like to now briefly mention three Lutheran pastors that played significant role in the development of Latvian written language.

Their names – Georg Manzel, Ernst Glück and Old Stender – have been forever written into history of Latvia.

Religious wars left deep and devastating scars across Europe, but they gave way to new world order, which was eventually established by Peace of Westphalia in 1648 when a new system formed.

Latvia has never experienced a religious war. Our religious confessions have always lived in peace, coexisting in the spirit of brotherly support and cooperation that we all know as ecumenism.

Even today Lutheran pastors are joined by priests and bishops of other Christian denominations in the Riga St Peter’s Church.

Our deep ecumenical traditions are a solid foundation for peace and understanding between Latvians. They are also a part of our unique cultural heritage.

‘Here I stand. I cannot do otherwise’. These are the famous words of Martin Luther the whole world knows.

It is a similar conviction that we can see in Ukrainians fighting for their freedom and independence today, trying to defend values supported by all Ukrainians, trying to survive in the war waged by Russia against all laws.

Ukrainians are fighting for the righteous cause. They cannot do otherwise.

And Europe must collectively, clearly and unequivocally show its position. Position based on our values and beliefs about what is right and wrong, and where the justice lies.

Law will finally allow the restoration of this historically important house of prayers and transform it into a cultural landmark.

There is a long way to go. However, I am absolutely certain that together we can accomplish anything. 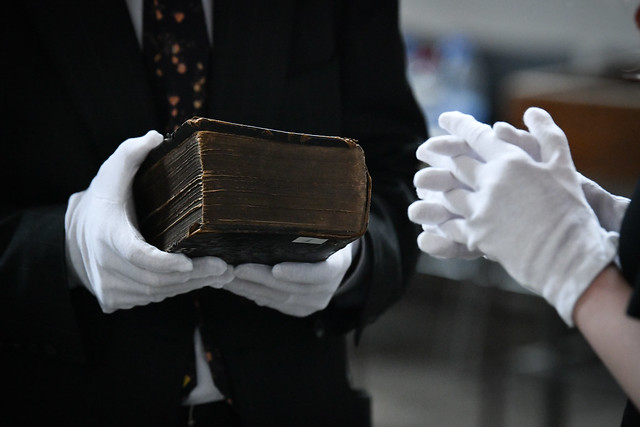