Egils Levits: The administrative court plays an important role in ensuring the existence of the state On 30 August at the administrative judicial system centennial closing conference “Values and Rationality: Limits in Society and Adjudication”, which was held at Riga Castle, President of Latvia Egils Levits noted that “the administrative court plays an important role in ensuring the existence of the state, namely, in upholding statehood”.

“A state based on the rule of law is based on the administrative court, therefore the justices of administrative courts must possess a special sense of statehood,” the President of Latvia emphasised one of the values that judges must uphold. “We are a democratic society, and in the interests of the whole society justices must have a positive disposition towards their state,” President Levits continued.

In his speech, President Levits also highlighted that the duty of both administrative courts and the Constitutional Court is to resolve conflicts, which arise out of a clash of values. Furthermore, the President of Latvia noted that in terms of how values are understood, all people are equal in a democracy: “On a daily basis, people interpret values much more often than courts do, therefore society plays a special role in defining values and their hierarchy. Society is the true source of values.”

The President of Latvia also recalled the historically established need to formalise and legalize values by enshrining them in laws or constitutions, “so that society and the state do not disintegrate into different value groups”. As of 2014, the common values of the people of Latvia are included in the preamble of the Constitution of the Republic of the Latvia (the Satversme) and serve as the basis for the work of the legislature, the government, state institutions and the courts. 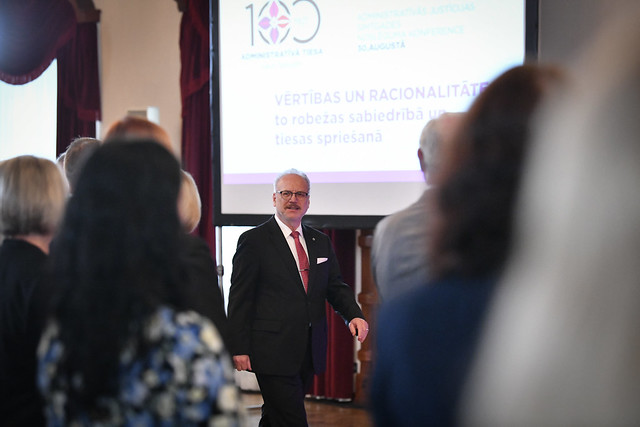