This is the first official visit of President of Romania to Latvia since 2001. It carries a symbolic meaning as Latvia and Romania celebrate the centenary of the establishment of diplomatic relations and confirms the friendly relations between Latvia and Romania, which need to be further deepened given the current international climate.

Latvia and Romania are allies in the framework of the European Union (EU), NATO and other international organisations. We have similar, and in some cases shared, opinion on many issues, including Russian invasion of Ukraine, which has had a significant impact on security across Europe.

Like Romania, Baltic countries belong to NATO’s Eastern Flank or the so-called Bucharest 9 (B9), a club of countries created upon the initiative of President Iohannis. We meet regularly to discuss priorities of NATO Eastern Flank, which also mentally marks our region more distinctly on European map. NATO Eastern Flank is a region bound by common security interests.

We highly welcome Romania’s decision to return to NATO’s Baltic air-policing mission in  2023.

We also welcome Romania’s decision to open diplomatic mission in Riga. It is a significant step towards closer bilateral, economic and political contacts. Next year we will also have direct flights between Riga and Bucharest.

Latvia and Romania closely cooperate in other regional formats such as the Three Seas Initiative (3SI). Most recent Three Seas Summit and Business Forum took place in Riga this summer and President Iohannis was among its participants. Bucharest will host the next summit and business forum in 2023. 3SI is a format that gives countries in this region an opportunity to pursue common goals, especially in areas like infrastructure, energy, digital technologies, and thus promote development in these sectors.

President Iohannis and I also talked about Western Balkans. EU-Western Balkans Summit will take place on 6 December. Latvia and Romania agree that it is necessary to achieve progress in EU-Western Balkans relations because these countries were invited to integrate 15 years ago and then were left in the dark about their future perspectives, which destabilised situation not only inside these countries but also in neighbouring regions. It is in the common interests of the EU to resolve this matter.

I want to thank my colleague President Iohannis once again for visiting Latvia and making this historic step in development of the bilateral relations between Latvia and Romania. 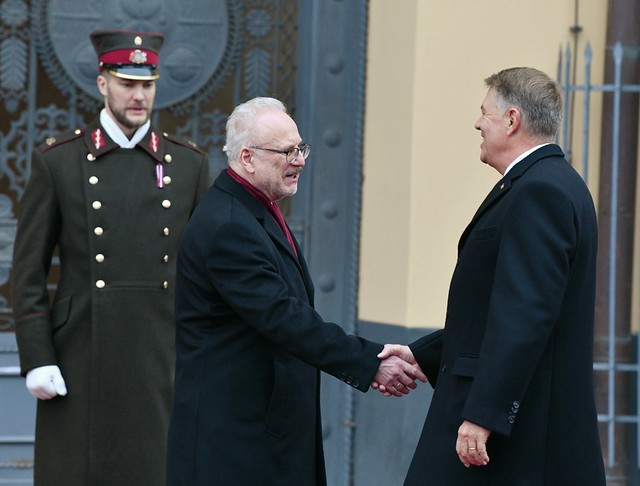