On 10 August, President of Latvia Egils Levits met with the United States of America Secretary of Defence Lloyd Austin III at the Riga Castle. Meeting focused on strengthening of the defence of NATO eastern flank and especially the Baltics. Egils Levits thanked the US for its commitment to further reinforcement of its regional presence in the Baltics, which is another confirmation of the spirit of solidarity among NATO allies.

US Defence Secretary confirmed that Article 5 is sacrosanct and all NATO member states are equal – attack on one will be construed as an attack on all. Secretary Austin also thanked Latvia for its contribution to strengthening of NATO forces through activities like joint military training among other initiatives.

One of the key topics of the meeting was Russian war against Ukraine. US Defence Secretary praised Latvia for military, humanitarian and political support provided to Ukraine.

Both officials agreed that Russian invasion of Ukraine carries military and also ideological and informational consequences. It is lead by imperialistic desire to dominate Europe. The new Strategic Concept of NATO adopted during the Madrid Summit is therefore crucial because it defines new core elements of NATO’s deterrence and defence posture, as well as comprehensive and coordinated approach to strengthening of the defence framework for NATO’s eastern flank and especially the Baltics. Lloyd Austin also stressed that Russia did not expect such a cohesive and strong response from the Alliance. 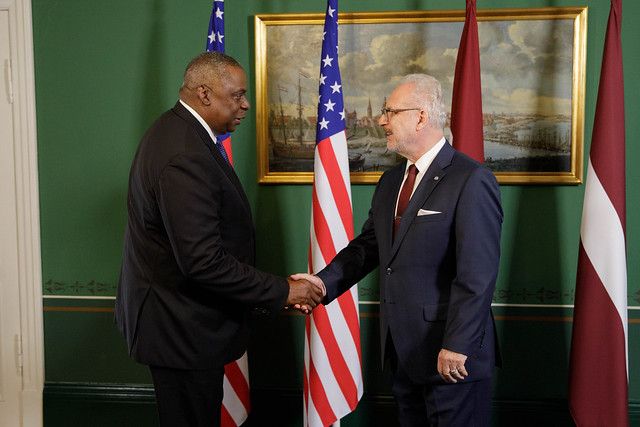