President of Latvia: we need to strengthen democratic values and solidarity between democratic states at the international level On 23 May, President of Latvia Egils Levits took part in the The Future of Democracy discussion at the World Economic Forum in Davos. President is confident that the democratic world should strengthen democratic values and solidarity between democratic states at the international level in response to current geopolitical challenges.

The continuing Russian invasion of Ukraine has clearly shown how fragile democracies can be, President Levits indicated. ‘Freedom and democracy are our biggest values. We need to defend them. This is the unfortunate side-effect of Putin’ s aggression against Ukraine,’ President of Latvia said. ‘ This is a war between an autocracy and a democratic state. It is not just a military conflict between two states. It is a clash of two systems, two different kinds of government. We can protect ourselves by supporting Ukraine as it is now fighting our battle. Democratic world must help Ukraine to put any doubts about Ukraine’s victory to rest.’ It is a good time for democratic world to become even closer, said Egils Levits.

President Levits mentioned three factors that have influenced liberal democracies. ‘I believe there are three factors that affected liberal democracies in past 10–15 years. First, social problems caused by globalisation were ignored. Second, migration and cultural diversity were heavily mismanaged. And, third, social media became the new tool for manipulating public opinion. There is no perfect solution for these challenges,’ Egils Levits said.

According to President of Latvia, third factor creates ‘fertile soil for populism’. ‘As we can see, populism is a real threat and enemy to democracy. Populism gives wrong answers to real problems. It specifically targets democratic institutions, including courts and free press and other vehicles too. Democracy cannot survive without these vital institutions,’ President Levits said.

Link to the video recording of the discussion: 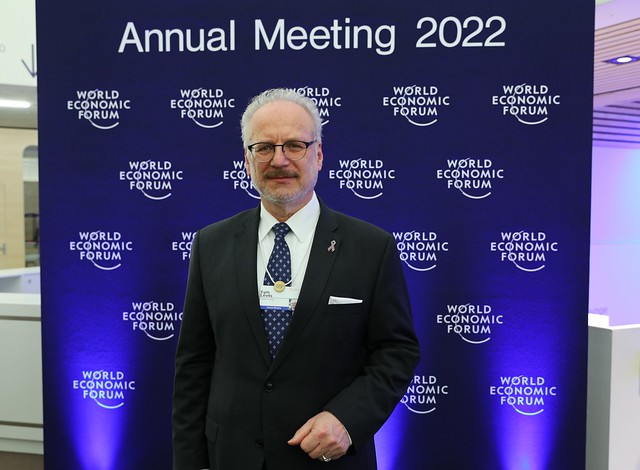 President of Latvia Egils Levits will attend the World Economic Forum in Davos on 22-25 May. He will join other opinion leaders for a discussion on the security, economics and future of Europe and…
Foreign policyEgils Levits
Print page
Download PDF
Share